We are atom! We are energy!!

Believe or not We are made up of Atom, a chemical component. We are an Energy that has both scientifically and spiritually proven facts!!

However, God Soldiers don't believe on the scientific evidences and facts based on the universal law of nature govern with cosmic force. I strongly believe that we are made of atom thus we are energy we changes only the form we never die just our body is collapsed and convert to another form like water to ice and water to gas and vice verse! 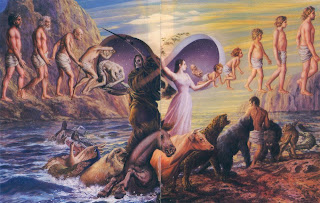 Our Karma (intentional thoughts and deeds/actions in this life to others) determine in which form of energy we convert immediately after our body collapsed/died.

Collapsed of our body from present human form means beginning of another life. That's the reason we've to do good Karma. There is no hell and heaven. Both hell and heaven is in this earth. However, to create fear in our mind clever mind had said there is a hell and heaven but awaken person like Buddha don't believe on this fact.

Gautam Buddha had well explained about this since it is considered scientific practical philosophy of life, which general people find hard to understand because Buddha level of conscious is the highest form of human consciousness that in 5000 years one person can achieved it.

In this world so far it is said that 28 Buddhas had born and Siddhartha Gautam was the last Buddha out of them at present and it takes another 2500 years more to born such person again in this universe.


There are enough evidences scientifically as well spiritually to prove that we are atom, we are energy, we never die but only form changes.

"Recognize that the very molecules that make up your body, the atoms that construct the molecules, are traceable to the crucibles that were once the centers of high mass stars that exploded their chemically rich guts into the galaxy, enriching pristine gas clouds with the chemistry of life. So that we are all connected to each other biologically, to the earth chemically and to the rest of the universe atomically. That’s kinda cool! That makes me smile and I actually feel quite large at the end of that. It’s not that we are better than the universe, we are part of the universe. We are in the universe and the universe is in us.”
― Neil deGrasse Tyson, an American astrophysicist and science communicator.
Posted by Laxmi Tamang at Thursday, May 02, 2013