WHY Feel PROUD if a county status is POOR and LOW in terms of international indicators ?

I just don't understand wonder why our people, especially from Nepal and India are very much proud being of Nepali, Indian, Hindu, or so forth. I suppose it MUST be their ignorance to think and feel such being ignorance breeds such low level of human consciousness feeling as said by  Dr. David  Hawkins in his book titled "Power VS. Force: The Hidden Determinants of Human Behavior" published in 2002. As per David Hawkins and his team discovered a scale of 1 to 1000 to questions involving morality, motive, and consciousness, they were to measure the “attractor fields” that are responsible for human behavior. For example, Shame calibrates at just 0-20 at the low end of the scale, whereas Enlightenment calibrates at 700-1000 at the high end. It’s also worth mentioning that anything below the level of 200, or Courage, is “weak." and Pride is at the level of 175 which is said that the level of pride is something that most people aspire to. It’s socially encouraged. We’re told we should take pride in our work, accomplishments, and material objects. Compared to the lower levels, pride feels great. It certainly beats the depression and hopelessness found in Shame and Apathy. However, pride is still below the crucial level of 200. It is still weak, and thus is related to force rather than true power.

Pride is a weakness because it can so easily transform into any of the lower levels. If a prideful businessman suddenly loses all his money, he could easily go through Anger, Fear, and end up at Apathy, completely losing touch with what he based his life around. Pride comes from associating ones self with things that don’t really matter. Although pride feels good at first, it is ultimately foolish. Religious wars are often a function of pride. It lacks the unification of the higher levels, instead being based on the egoic need to be better than someone or something else.

Instead of becoming so proud of ourselves we have to learn to strive to do something good at least in the knowledge part or wherever it is possible from our level best to see our nation at the middle or above level in each and every socio-economic status and developmental indicator and index at the international level ranking. I have noticed that almost all South Asian nations are always backward in each and every index such as Corruption Perceptions Index, Human Development Index, Gender Inequality Index, Democracy Index,  Global Peace Index, Knowledge Economy Index and so forth.

I feel ashamed knowing the status of Nepal in the world rankings of the Knowledge Economy Index of 2012.

I believe this is all due to scripture knowledge that we fail to promote scientific knowledge that is why our condition is worse in the world in terms of Knowledge generation and use for the productive propose for the sake of humanity and in contributing to the next generation.

Out of total 145 nations surveyed Nepal stands at 135 position and our neighbor greater India stands at 110 and China at 84th position.

It seems that in the South Asia Nepal needs to learn a lot from Sri Lanka since it has stood at 101.

We Nepalese mostly learn from Bangladesh but unfortunately they stand at 137th position. Pakistan stands at 117th position which is better than Nepal but worse than Sri Lanka and India. 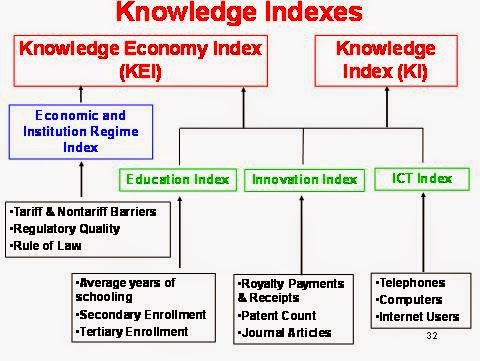 The Knowledge Assessment Methodology consists of 148 structural and qualitative variables for 146 countries to measure their performance on the 4 Knowledge Economy (KE) pillars:
- Economic Incentive and Institutional Regime,
- Education,
- Innovation, and
- Information and Communications Technologies (ICT).

Variables are normalized on a scale of 0 to 10 relative to other countries in the comparison group.

These are really frustrating and annoying situation of our country in which I didn't see any room to be happy or proud of which is considered unhealthy psychology. However, having said this I am always realistic optimistic and believe in improving the status quo that can be achieved if we keep our mind, positive and strive to change and challenge our own fixed and traditional mindset.  I hope in the near future some days our country and region will be as competitive as Hong Kong, Singapore and other nation at the international arena.


References
1.  Fred Tracy, 2011, Power vs Force: The levels of Consciousness, accessed from  http://www.fredtracy.com/power-vs-force-the-levels-of-consciousness/