Religion itself is not Bad: Custodian of religions made Bad

There are many different types of Ideology. Remember, though, each justifies or challenges existing or new class relations and the relationship of people to the means of production.

Some include:
Ethical: Assumptions concerning right and wrong behavior.

Epistemological: The nature of “truth” and means of finding it. Science, for example, vs. Fundamentalism. Faith vs. Reason.

Legal: Concepts of “justice”. Both the laws and means of enforcing them.

Gender and Sexuality: The “proper” role of men, women (and children) within a culture. The definition of “marriage”, inheritance, sexual mores.

Race: Not only the role of race in society but the very definition and existence of race. Ex: Science argues race does not exist. Slavery predicated on racial distinctions. Heart of Darkness and Things Fall Apart.


Religion itself is not bad but made it bad, especially by the custodian of religions because they just used it for their own sake of benefit fooling, bullying and ruling over innocent and ignorant mind as per their wish and enjoy ruling over them.

I said Religion itself is not bad because in the religious texts there are many good things as well besides BAD against humanity and many are mythological thoughts and ideas based on imagination. 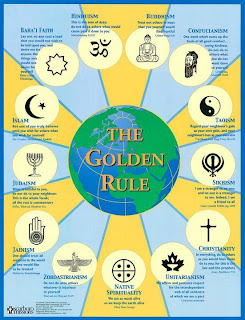 I really appreciate and admire ancient Indian sages because they were very much creative and imaginative who had identified 1008 different names to powerful ancient Adhibasi man, Shiva. I didn't realize that even Krishna, Durga, Brahma, etc are Lord Shiva and also for Linga there are many meanings in a holy text book which we general Nepalese think Linga means just a male sexual organ.

Some Hindu custodian brother, Mr. Lohani said you are not consistent in your views and you are in confused state. In fact, I'm very much consistent in my views and thoughts but the way you guys look my write up is prejudice because you guys see and read my write up wearing only one lens of Hinduism whereas I've different perspectives since I read Quran, Buddhism thoughts, hindu texts, Bible, confucius, Tao, etc.

Religion is nothing more than political and philosophical ideologies like communism, capitalism, Taoism, feminism, humanism, atheism, naturalism, etc. All ideological believers think that MY WAY IS HIGHWAY and OTHERS ARE SHIT!

Custodian of religions MUST reform and adjust their religion ideological beliefs and thoughts as per the time demand. They can't just impose and continue 3000 years back thoughts and ideology at present 21st century and holler against those who want to see humanity and prosperity of all human beings making them awake and conscious about the facts.