No one is born hating another person: Why Hitler became a dictator and why hatred for Jews ?


"No one is born hating another person because of the color of his skin, or his background, or his religion. People must learn to hate, and if they can learn to hate, they can be taught to love, for love comes more naturally to the human heart than its opposite."
- Mandela, Nelson

Let's learn about the Facts why Hitler became a dictator, why hatred for Jews and how he died!!

Artist and Anti-Semite (members of people particular the Jews and Arabs): 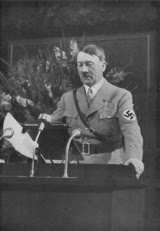 - Throughout his youth, Hitler dreamed of becoming an artist. He applied twice to the Vienna Academy of Art (once in 1907 and again in 1908) but was denied entrance both times.

- After his mother's death, Hitler spent four years living on the streets of Vienna, selling postcards of his artwork to make a little money.

- No one is quite sure where or how Hitler picked up his virulent antisemitism. Some say it was because of the questionable identity of his grandfather (was Hitler's grandfather Jewish?). Others say Hitler was furious at a Jewish doctor that let his mother die. However, it is just as likely that Hitler picked up a hatred for Jews while living on the streets of Vienna, a city known at the time for its antisemitism.

Hitler as a Soldier in World War I:

- Although Hitler attempted to avoid Austrian military service by moving to Munich, Germany in May 1913, Hitler volunteered to serve in the German army once World War I began.

- Hitler endured and survived four years of World War I. During this time, he was awarded two Iron Crosses for bravery.

- Hitler sustained two major injuries during the war. The first occurred in October 1916 when he was wounded by a grenade splinter. The other was on October 13, 1918, when a gas attack caused Hitler to go temporarily blind.

- Furious at Germany's surrender, Hitler returned to Munich after the end of World War I, determined to enter politics.

- In 1919, Hitler became the 55th member of a small antisemitic party called the German Worker's Party.

- Hitler soon became the party's leader, created a 25-point platform for the party, and established a bold red background with a white circle and swastika in the middle as the party's symbol. In 1920, the party's name was changed to National Socialist German Worker's Party (i.e. the Nazi Party).

- Over the next several years, Hitler often gave public speeches that gained him attention, followers, and financial support.

- In November 1923, Hitler spearheaded an attempt to take over the German government through a putsch (a coup), called the Beer Hall Putsch.

- When the coup failed, Hitler was caught and sentenced to five years in prison.

- It was while in Landsberg prison that Hitler wrote his book, Mein Kampf (My Struggle).

- After only nine months, Hitler was released from prison.

- After getting out of prison, Hitler was determined to build up the Nazi Party in order to take over the German government using legal means.

- In 1932, Hitler was granted German citizenship.

- In the July 1932 elections, the Nazi Party obtained 37.% of the vote for the Reichstag (Germany's parliament), making it the controlling political party in Germany.

- On January 30, 1933, Hitler was appointed chancellor. Hitler then used this high-ranking position to gain absolute power over Germany. This finally happened when Germany's president, Paul von Hindenburg, died in office on August 2, 1934.

- Hitler took the title of Führer and Reichskanzler (Leader and Reich Chancellor).

- As dictator of Germany, Hitler wanted to increase and strengthen the German army as well as expand Germany's territory. Although these things broke the terms of the Versailles Treaty, the treaty that officially ended World War I, other countries allowed him to do so. Since the terms of the Versailles Treaty had been harsh, other countries found it easier to be lenient than risk another bloody European war.

- In March 1938, Hitler was able to annex Austria into Germany (called the Anschluss) without firing a single shot.

- When Nazi Germany attacked Poland on September 1, 1939, the other European nations could no longer stand idly by. World War II began.

- On July 20, 1944, Hitler barely survived an assassination attempt. One of his top military officers had placed a suitcase bomb under the table during a conference meeting at Hitler's Wolf's Lair. Because the table leg blocked much of the blast, Hitler survived with only injuries to his arm and some hearing loss. Not everyone in the room was so lucky.

- The following day, April 30, 1945, Hitler and Eva committed suicide together.

Going through the Hitler life story and present political situation of Nepal and else in relation to caste/ethnicity and relition I would like to conclude stating that do not side lined anyone from the state welfare system just because of their belief system is different from the rulers/politicians have. Instead strive towards making socio-economically as well politically inclusive socio-democratic society to establish. Hegemony and monopoly might give birth to a dictator that can genocide certain groups even in this 21st century who knows.

"I think Hitler always wanted to break the power of the Jews and this could be achieved practically and also symbolically in various ways, like removing Jews from economic, political, social and cultural influence, by segregating them territorially, by forcing them onto a reservation for example, or finding some corner of the German sphere of influence where they could be relocated, and if they lived or died it didn’t really matter but their power would be broken."
- Professor David Cesarani, one of the world’s leading scholars on the Holocaust, and his acclaimed book on Eichmann won the American National Jewish Book Award in History, 2006.

2.Hitler's decisions about the Jews by Professor David Cesarani, one of the world's leading scholars on the Holocaust, and his acclaimed book on Eichmann won the American National Jewish Book Award in Hisotry 2006.  http://ww2history.com/experts/David_Cesarani/Hitler_s_intentions_for_Jews
Posted by Laxmi Tamang at Thursday, May 16, 2013