“Those who are able to see beyond the shadows and lies of their culture will never be understood, let alone believed, by the masses.”
-Plato (427–347 BC) 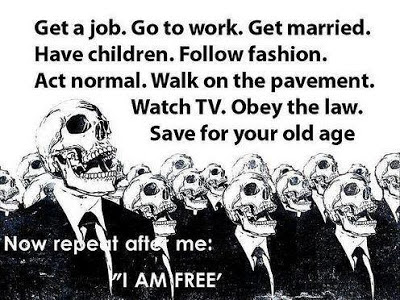 In the world there are around 7-10% people who are abnormal because they don't follow 90% of normal people crowd, who have been communally hypnotized, controlling their mind.

And achievement of such abnormal people are considered exceptional by 90% normal people whose mindset have been programmed by 1% of people of the world.

But I consider them they are abnormal because they don't run after to follow 90% of normal people life. They break the normal chain and cycle of life. Thus they generate their own ideologies, philosophies and do own discoveries and let rest 90% follow and use them.

This made be ponder and wonder to think about who is a normal and abnormal people in this world. Those who use own MIND POWER believing oneself and hard work making others followers or those who follow 90% normal crowd,  mental slavery of masses  in our society!!!
Posted by Laxmi Tamang at Saturday, March 09, 2013