at their level and be equal.

Out of total 135 countries were analysed for the Global Gender Gap Index 2012 Nepal stands on 123rd and India 105th.

Wow! salute to Nepalese and Indian men for their bravery in succeeding to oppress and suppress your girls and women. I really appreciate these 2 countries men because they have double faces. In one hand they worship women/goddesses (Durga, Bhagawati, Kali, Sita, Parvati, Laxmi, Swarswati, etc) and also suppress, oppress, abuse, harass, dominate, discriminate, humiliate, hate, murder and kill girls/women.

In Asia male from Philippines and Sri Lanka seems really great since these two countries ranked 8th and 39th out of total 135 countries of the world in the report.

Always India and Nepal due to the Law of Manu (Manusmriti) driven mindset and Islamic countries lag behind in gender equality. I've been looking this report since last few years. Sri Lanka is always ahead then USA till 2009 and other developed nations. Nepalese men MUST be proud for the success in suppressing and oppressing women in Nepal.

"I am choked by the Global Gender Gap Report 2012 which listed Iceland the 1st equally adapted country both for men and women, Philippines (8th) leads in Asian countries where Mozambique (23rd) and Burundi (24th) from African poor countries treat both genders equally well. Asian giant China has still good position (69th) in the race. Nepal and India have to do lot of things to bring their female counterpart equally well. Where Japan, the most advanced country already in Asia has very poor stand on it. Literately, where the fuss gone on self reclaiming Gender equality in Asian developed nations? We should proud with Sri Lankan (39th) achievements toward filling gap between men and women in South Asia.
Nepali and Indian cultural men prize and pray female divinity to get strength from them and bow titling forward 180 degree upper body posture into goddess feet lamenting for power, but kick their own mother, wife and daughters out at home. These people are made of ass from those god and goddess, but refuse to realize their mother is one who gives birth to them."- Chhatra Magar, Japan, 26 Oct 2012

It shows that the 135 countries covered in the Report, representing over 90% of the world’s population, have closed almost 96% of the gap in health outcomes between women and men and almost 93% of the gap in educational attainment. However, the gap between women and men on economic participation and political empowerment remains wide: only 60% of the economic outcomes gap and only 20% of the political
outcomes gap have been closed.


Regarding the status of women and gender equality it would be interesting to analyse based on the country who believe in certain faith because it shapes the people thoughts and practices.

Nepal being a Hindu state before the declaration of secular state in 2006, therefore, people ideology are still guided by Hindu faith since 80% population are religiously Hindu as per the Census 2001. Relatively women situation in Hindu and Muslim societies are worse then Christian and Buddhist faith believer societies. Ideology of human beings are shaped by religious belief. It is interesting to see from below figures the countries that think it is necessary to believe in God in order to be moral ( Source: The Pew Global Attitudes Project 2007). 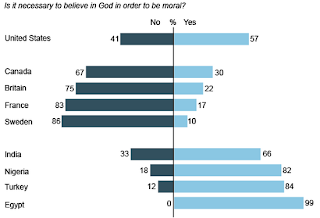