Be like a condom defensive to protect yourself and for the sake of humanity since there is no choice for us to protect mother earth and humanism on this planet that every great mind talk about across the globe if you explore about their thoughts, views, understandings and knowledge based on natural science rather than scripture based archaic mindset developed outdated information and knowledge.
In the Independent news article dated 30 December 2015, Sir David Frederick Attenborough, an English broadcaster and naturalist believes "more women around the world urgently need to be given political control of their bodies"  [1].
However, to do this each and every girl and woman has to be empowered and educated and my sister and I are both contributed for the purpose not to have any burden to our mother earth since we love our mother earth.
In fact, I realised that uneducated and illiterate ignorant and religious men and women give more burden to mother earth giving birth too many children so we've to educate them to be awaken in mind to save the mother earth. Always, indoctrinated from early childhood and dogmatic people are very much misogynists and blind in mind who can't think differently other than scripture thoughts and ideas what they have swallowed they just vomit on others mind.
Sir David Frederick Attenboroughis very right to say that

"It's desperately difficult, the dangers are apparent to anybody,"
"We can't go on increasing at the rate human beings are increasing forever because the Earth is finite and you can't put infinity into something that is finite.
"So if we don't do something about it then the world will do something about it - the natural world that is - we will starve.
"The only straw of comfort or of hope, and even that is pretty fragile, is that wherever women are given political control of their bodies, where they have the vote, education, appropriate medical facilities and they can read and have rights and so on, the birth rate falls, there's no exceptions to that.
In the 2011 The Daily Squib's article titled "Scientists Prove That All Religious Books Are Man-Made Nonsense" Dr Julius Sanreso said [2]:
"One must consider the fact that, even now, there are religious zealots and ordinary people still entrenched in a control belief system that is so far removed from reality that it borders on madness. There is no rational or scientific way that organised religions can have a modicum of truth or factual reality because of the very reason that these books are entombed in the time that they were written. These books should therefore simply be viewed as limited parables and historical fiction, as well as a lesson in how millions of people can be so easily controlled.
“The game is up for all religions, how long can this sham carry on, with their ridiculous outdated ceremonies? The priests are deceivers, and they need to come up with some pretty radical solutions to their thousand year old magic trick. People aren’t as dumb or easily swayed as they used to be thousands of years ago, they actually have reasoning powers and can see through the utter nonsense of organised control systems like religion. We must ensure that the people who have been fooled for so long by fictitious belief systems utilised to control humans do not get too angry when they realise that what they believe in is nonsense written by humans utilising human created language. This could be dangerous for society, so we must either let them carry on believing their fiction or try to somehow support them when they realise the truth,”.
Therefore, I urge every girl, women and men to be a condom because people usually say to strong and bold woman an "IRON" lady. But I would say to such a lady, a "Condom" lady because condom stands like a safeguard against weed like population growth and also prevent transmission of sexually transmitted infections like HIV and else. As we all know that mainly Condom belongs to men and organised religion power politics also belongs to men.

In my eyes from South Asian a truly Condom lady is Dr Taslima Nasrin aged 55 who is a Bangladeshi author and former physician who has lived in exile since 1994. From a literary profile as a poet in the late 1980s, she rose to global fame by the end of the 20th century owing to her essays and novels with feminist views and criticism of Religion. 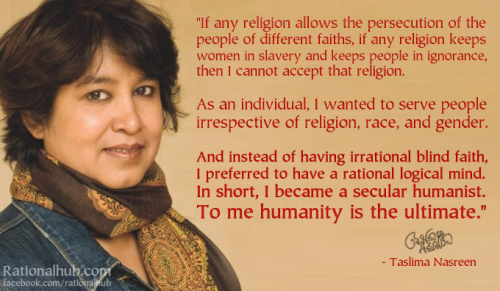 Since leaving Bangladesh in 1994 on account of threat calls, she has lived in many countries as of June 2011 she lives in New Delhi. She works to build support for secular humanism, freedom of thought, equality for women, and human rights by publishing, lecturing, and campaigning.
We need more Condom lady in this world and especially developing world like South Asian and Africa to fight against evil and devil minded people who don't see women as a human but see them as an slave and keep killing own brothers and sisters in this world in the name of RELIGION and GOD.