Growing evidence suggests that  unnecessarily performed life saving procedure like Caesarean Section with commercialisation intention of healthcare providers has it negative implication on the health and well-being of those artificial born children compared to naturally via vaginally born children. The recommended level of Caesarean Section as per the World Health Organisation (WHO) in saving lives of babies and mothers is 10-15% in any given settings [1]. If it exceeds than the recommended level than it is obvious that women have been unnecessarily cutting by obstetricians to generate fund for themselves and the hospitals that they are working for. Similarly, if there is low rate of caesarean section than it suggests that government is failing to make available and accessible life saving service for childbearing women.  The WHO guidelines take into account the number of C-sections needed for complicated births and curbing maternal mortality rates, so even too few procedures are a problem.


All sorts of violences are very common in India thus it is not surprise to have an obstetric violence shockingly rising. Like in Venezuela there should be strong law and order to punish perpetrators in order to STOP obstetric violence such as Caesarean Section because in the days to come the consequence of unnecessarily done commercial Caesarean Section procedure to give a new birth of a nation citizen is 50% more chance of developing chronic health problems like asthma, diabetes, obesity, rheumatism, allergies, bowel disorders, and leukaemia than people born naturally evidence from developed world has suggest.
The reason WHY Caesarean Section lead to chronic health problems has its prevailing theory is that women may pass “good” bacteria to babies during a vaginal delivery that protects against disease, Dr Jan Blustein, a professor of medicine and health policy at New York University said [2]. Another possibility is that hormones released during labor might play a role in minimizing risk, she said
“While caesarean deliveries can be life-saving for both mother and baby, caesareans can also lead to short-term and long-term complications for both,” American College of Obstetricians and Gynaecologists' President Dr. Mark DeFrancesco said [2].
"There is a growing body of evidence suggesting that the mode of delivery might have lasting health implications", said Dr. Susan Hellerstein, an obstetrician at Harvard Medical School and Brigham and Women’s Hospital in Boston [2]. 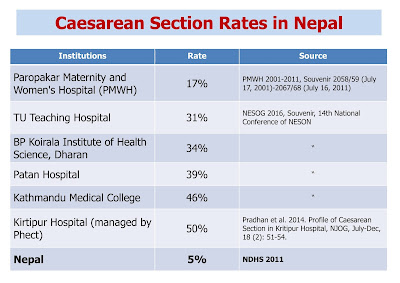 In Nepal, there is a increasing trend of Caesarean Section in urban areas among educated and financially better off women who seek maternity service in private hospitals.

1. WHO 2010. The Global Numbers and Costs of Additionally Needed and Unnecessary Caesarean Sections Performed per Year: Overuse as a Barrier to Universal Coverage.WHO, Geneva.
2.Rapaport, Lisa, 2013. Cesarean birth may raise baby’s risk of asthma, diabetes and obesity accessed from http://www.reuters.com/article/us-child-health-cesarean-birth-idUSKBN0OR1TK20150611