Blind Faith is the root causes of human suffering


Religion is a sword and weapon use to control human mind created by cleaver brain of ancient time. I consider it is the root cause of human and women's suffering since it imposes dogmatic thoughts and beliefs without rationalizing it. 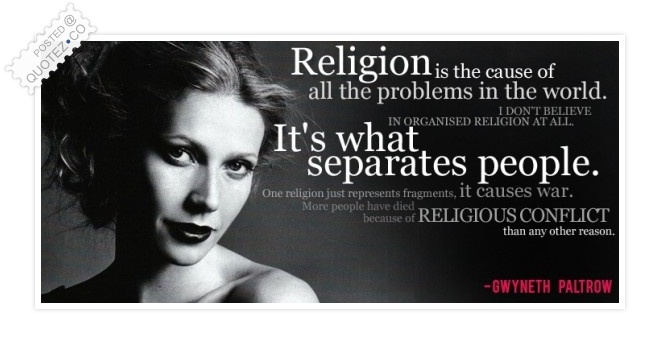 I believe that in some extent now I've explore adequately about human and women's suffering and abusing in this  our society.

Though I was born in a Buddhist believer family I never ever follow any religion doctrine and dogmatic thoughts, practices and views in my life. I'm cultural Buddhist as said by I'm also cultural Buddhist but I'm not practicing Buddhist and I'm not religious person but respect all religions if don't impose their dogmatic thoughts. Our individual identity is based on our ethnicity and our ethnicity based on our culture and our culture is guided by religious belief as mentioned by Richard Dawkins (aged 71), an English ethologist, evolutionary biologist, author and an emeritus fellow of New College, Oxford, and was the University of Oxford's Professor for Public Understanding of Science from 1995 until 2008 who said:

"I'm a cultural Christian in the same way many of my friends call themselves cultural Jews or cultural Muslims. I am against religion because it teaches us to be satisfied with not understanding the world.

Religion is about turning untested belief into unshakable truth through the power of institutions and the passage of time.

One of the things that is wrong with religion is that it teaches us to be satisfied with answers which are not really answers at all."


Similarly, I'm not a practicing Buddhist and I'm not religious person but respect all religions if don't impose their dogmatic thoughts and beliefs without any rational because it has its own essence of widosm and knowledge as well.


Since my early childhood I was always skeptical towards religons and think that religion is created for the benefit of priests, monks and people who can afford because I seen and realized that poor people can't afford to invite preachers, priests, monks, etc at home to do religious ceremonies, and also go to temples and  visit holy places that we've across Nepal and India.

I've realized that spiritual and religious are completely two difference things. BUT many cleaver religious people claim themselves as a spiritual to protect their face and acts to lure ignorant and innocent mindset to fool, bull and rule over them.

I strongly suggest my dear Nepalese brothers and sisters who are so much concern about to see the change in Nepal to read about Jiddu Krishnamurti (1895-1986) who was born in an Indian Brahmin family, a speaker and writer on philosophical and spiritual subjects, and was widely considered as a World Teacher.

His subject matter included: psychological revolution, the nature of mind, meditation, inquiry, human relationships, and bringing about radical change in society. He constantly stressed the need for a revolution in the psyche of every human being and emphasized that such revolution cannot be brought about by any external entity, be it religious, political, or social.

"Religion is the frozen thought of man out of which they build temples."
- Jiddu Krishnamurti

Your belief in God is merely an escape from your monotonous, stupid and cruel life.
- Jiddu Krishnamurti

WEAK MIND PREFER AND ADVOCATE FOR RELIGON to keep onself in a safe side worshipping GOD for SAFETY and SECURITY to lure own and others mind to keep in safety net!
Posted by Laxmi Tamang at Tuesday, February 12, 2013