Does religion is necessary to be a moral?

Today, I had an interesting discussion on the facebook about Religion and Morality. One of my facebook friends, Mr. Giri from Kathmandu, Nepal said:
"A man just see the words and come agresively forgetting all his previous manners...You also forgetting it...even you are following buddhism....what Zen Religion...! Every body should know Religion+Science=Life

if we remove science in life, the life is boring... and if we remove religion in life, we should face present anarchism, raping,killing,ruthless and manymore.."
I replied him saying, "I respect each and everyone views because that depends upon their level of understanding, knowledge and ignorance. Giri ji it is your definition of Life=religion+science because there is 14.09% people in the world who don't believe and follow religion made by an ancient clever mind to bull, fool and rule over their mind. This figure is more than the hindu (13.26%) population in the world. Mortality has nothing to do with religion. Morality depends upon human consciousness, feelings and knowledge that they obtain. "Morality" does not require religion, it requires common decency. We don’t need religion to have morals. If we can’t determine right from wrong, then we lack empathy, not religion. I've personally met some athiest who are moral without the needs of a religion. So I believe one does not need religion to be moral. Though some people feel that religion is needed to dictate how they morally judge this does not mean they cant distinguish right from wrong if they were not religious. We've a brain to think and different WHAT is right or wrong to do so we don't need religion to be a moral. I've noticed many religious people without moral as well.
"Wisdom, compassion, and courage are the three universally recognized moral qualities of men."
- Confucius
Then he replied rationalizing,
:Religion is irrational--by the irrational and for the irrational. Reason can not contain it; reason is so small. Religion is vast sky of existence.Reason is a tiny human phenomenon. The reason has to be lost, has to be dropped. Only by going beyond the mind does one start understanding what is. That's the radical change. No philosophy can bring that radical change--only religion.
Religion is non-philosophic, anti-philosophic and Zen is purest form of religion. Hence it is irrational, it is absurd. If you try to understand it logically you will be bewildered. It can only be understood illogically. It has to be approached in deep sympathy and love. You cannot approach Zen through empirical, scientific and objective concepts. They all have to be dropped.
It is a heart phenomenon. You have to feel it rather than think it. You have to be it to know it. Being is knowing and there is no other knowing.
That's why religion has to choose a different kind of language. Religion has to talk in parables, in poetry, in metaphors, in myth. Those are indirect method of hinting at the truth--only hinting at the truth, no direct pointig; just whispering, not shouting. It comes to you in a deep rapport.
Science and Religion are diametrically opposite. They belong to different dimensions of existence.They don't overlap each other's ground, each other's fields. They simply never meet! but meet. They don't criss-cross. And modern mind has been trained for science, hence religio. has become almost out of date, of the past. There seems to be no future for religion."
My response to him was
"Giri ji as I said earlier I don't disagree with you because it depends upon in what level we've been aware or conscious about the fact with our open mind or how much we've been fooled and hypnotised by our faith "religion" and embedded our belief system in our subconscious mind. Since I was a child I was always skeptial and wonder WHY God don't make rich to poor; WHY poor people have to suffer a lot compared to rich and WHY poor people in the countryside don't have time to go to temples or visit holy places to worship, which they are the one who need god to help them to become a rich and come out from their problems and sufferings of poverty. These all wonder and curiosities never ever allowed me to follow in any faith blindly because my mind didn't allow to accept me it without any reason. After starting my study on the topic "Gender Power relation in Sexual and Reproductive Health" made me wake up and realise that we have been fooled for so long by being communally hypnotised. Then I decided to live with reason follow this mantra in my life:
"Do not believe in anything simply because you have heard it. Do not believe in anything simply because it is spoken and rumored by many. Do not believe in anything simply because it is found written in your religious books. Do not believe in anything merely on the authority of your teachers and elders. Do not believe in traditions because they have been handed down for many generations. But after observation and analysis, when you find that anything agrees with reason and is conducive to the good and benefit of one and all, then accept it and live up to it.”
- Buddha
"We must ensure that the people who have been fooled for so long by fictitious belief systems utilised to control humans do not get too angry when they realise that what they believe in is nonsense written by humans utilising human created language. This could be dangerous for society, so we must either let them carry on believing their fiction or try to somehow support them when they realise the truth," Dr Sanreso said. http://www.dailysquib.co.uk/sci_tech/3102-scientists-prove-that-all-religious-books-are-man-made-nonsense.html
Giri ji in your understanding what is a religion and what is a science! and also Who wrote religious books Would appreciate if you could share your thoughts or views on it."
Thereafter he didn't response to my question.

Anyway, I believe that we can't just say and claim that RELIGIOUS people are MORAL and non-religous people are immorable!

You do not need religion to be moral if you can't think what is right or wrong with your own brain and mind. 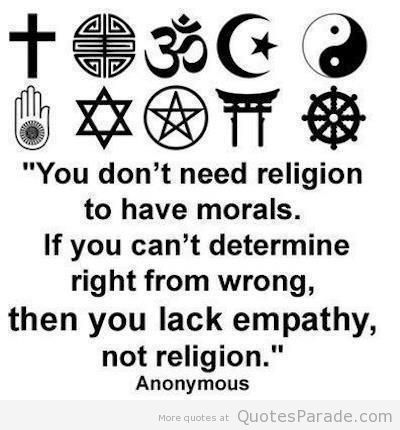 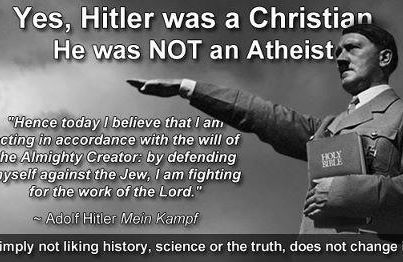 If religious people would be a moral one then WHY they engage in corruption, rape, violence, war, etc and also WHY Muslim hates non-muslims, WHY Hindu hates non-hindu, WHY Hindu and Muslim kills too many animals brutally in the name of God, WHY they treat women badly, and many more such questions needs to be answered if people think that religion is required to be a moral.
Therefore, I srongly believe that to be a moral we don't need any religion or no need to be religious person.
"If religious instruction were not allowed until the child had attained the age of reason, we would be living in a quite different world.

Religion is man-made. Even the men who made it cannot agree on what their prophets or redeemers or g...urus actually said or did.

Take the risk of thinking for yourself, much more happiness, truth, beauty, and wisdom will come to you that way."
- Christopher Hitchens (1949-2011), a British-American author and journalist
Infact, whether or not it is important to follow religion to be a moral. Here is the answer from one of the world great mind!

"Religion is an insult to human dignity. With or without religion, you would have good people doing good things and evil people doing evil things. But for good people to do evil things, that takes religion."
- Steven Weinberg (1933), an American physicist, and awarded the 1979 Nobel Prize in Physics for combining electromagnetism and the weak force into the electroweak force.