Do We Have theologist in Nepal and India???


Wonder do we've Theologist in Nepal and India who can teach us rationally about religions!!! 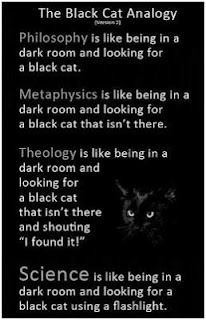 Philosophy: The study of general and fundamental problems, such as those connected with reality, existence, knowledge, values, reason, mind, and language.

Metaphysics: A traditional branch of philosophy concerned with explaining the fundamental nature of being and the world, although the term is not easily defined.

Theology: The systematic and rational study of religion and its influences and of the nature of religious truths, or the learned profession acquired by completing specialized training in religious studies, usually at a university or school of divinity or seminary.

Science: A systematic enterprise that builds and organizes knowledge in the form of testable explanations and predictions about the universe.

I have posted this above remarks in the facebook and one of my facebook friend from India, Jagannath Chatterjee suggested me saying, "Laxmi if you are really interested to know about religion, philosophy and spirituality kindly go through the lives and sayings of at least two modern day Saints, Sri Ramakrishna and Sri Ramana Maharshi. You can also study Swami Vivekananda and Pramhamsa Yogananda and even the religious writings of Mahatma Gandhi and Sarvapalli Radhakrishnan, the two political giants of India. If you study what quantum physics has to say and compare them to genuine spiritual teachings then they say basically the same things. Do not confuse irrational religious practices with the true religion or "Dharma (Righteousness)" that is followed by those seriously interested in a religious life. In the Indian subcontinent religion has always been refurbished with the knowledge and experience of spiritual masters and reformers who have regularly reformed religion and made it stay in conformity with current needs and practices. With my own experience in health and agriculture I can tell you that we cannot proceed very far without acknowledging the spiritual origins and facets of life. It is because we have neglected spiritual and moral truths in our present civillisation that we are facing the spiritual and moral vacuum that is leading us to utter destruction."

Then I replied him saying, Many thanks Jagannath Chatterjee ji for your suggestion. I've been reading about Swami Vivekananda and Gandhi but not others because I didn't know about them. I admire spirituality since it is the concept of an ultimate or an alleged immaterial reality; an inner path enabling a person to discover the essence of his/her being; or the "deepest values and meanings by which people live. However, I'm skeptical about man-made religions because it is a collection of belief systems, cultural systems, and world views that relate humanity to spirituality and, sometimes, to moral values thus can be distorted by the person with bad intention because I've been reading the Law of Manu, Rig Veda, etc which has discriminatory verses against girls, women and dalits. Caste and Gender Based discrimination in our part has been promoted by these books.

Then he answered me, Laxmi you have already realised the essence of spirituality. Questions like yours were also put to Ramakrishna and Ramana. The replies were similar. The advice was to worry about ones own realisation and not about what imperfections are there in others. Sri Ramakrishna used to say that like a mother realises the taste of each of her children and prepares food likewise, God too has opened numerous paths before his children, you accept the one most suited to you and proceed. Your realisation will transform the world and reform others, not your criticism. The world is imperfect, as I have told you earlier, it is like a dog's tail which can never be straightened. So let us study, absorb and practice what we like and can perform, slowly more help will come both external and internal and lead us further. The path is difficult to walk but that should not make us shun it for the path has to be traveled to realise our essence, to realise that our essence, the world's essence and God are the same thing.