Girls trafficking culture in Tamang community of Nepal: WHY and HOW it has established?

Though I belong to Tamang community I am from the eastern part of Nepal, Sunsari district Dharan and had grown up in a mix society of different castes/ethnicity. Therefore, although my surname is "Tamang" I never ever felt that I belong to Tamang community since I don't speak Tamang language nor do I have good knowledge about Tamang's culture and tradition. In my family only my mother can speaks Tamang language but my father and my four siblings don't understand and speak Tamang language like me.
First time in my life in 1995 while I was working for Koshi Zonal Hospital as a registered nurse I got an opportunity to receive Mental Health Training in Mental Hospital of Lalitpur district in Kathmandu valley. During the training period my residential stay had been arranged by the training organizer at Aasha Deep Nepal, a rehabilitation centre for mentally ill people. From their when home visits were made to follow up rehabilitated mentally ill patients in Kavre district along with Aasha Deep Nepal staff member he told me that in this district despite people are very much socioeconomically backward and deprived but all the houses with corrugated galvanized iron (CGI) sheet roofs had their daughter in Indian brothels for sex trade because surrounding Kathmandu valley Tamang people sell their daughter to India for their income. He also told me that Tamang people of these areas are very much happy when daughters are born and become sad when sons are born. Hearing such I was shocked and amazed thus couldn't even imagine how anyone can do such an evil and devil act against their own daughters.
In 1996 after I joined an NGO, Women's Rehabilitation Centre (WOREC) based in Kathmandu again I heard the same stories. Staff members at WOREC told me that many girls from Tamang community have been trafficked for sex trade by their own fathers and brothers and taken them to sell in brothels in India. This made me wonder why these Tamang people surrounding Kathmandu valley are doing such to their own daughters and sisters.
As my developmental sector career started from WOREC in 1996 and by joining this organisation I got the opportunity to work with trafficked girls returned from Indian brothels. First time in Nepal, NGO sector challenged government of Nepal by bringing trafficked girls from Indian brothels. Of the five NGOs namely, Maiti Nepal, ABC Nepal, Shanti Nepal and Navajyoti Kendra including WOREC, out of 121 returnees WOREC received 11 girls initially to facilitate them in the rehabilitation and reintegration to their families and societies. After a month eight more girls were received, which means total 19 girls were accommodated by WOREC and I was the one who was responsible to look after them since I've been assigned as a Rehabilitation Incharge and Warden of the Centre. Of the many girls returned India were from castes/ethnicities but came to know from them that mainly Tamang girls are the one trafficked to India and also brothel owners are also mainly Tamang women. I was surprised hearing the same stories third time in my life from trafficked girls.
When I first heard about Tamang people selling their daughter from Aasha Deep Nepal staff member I listened and ignored. But when I heard about the same story second time from WOREC staff member I started to wonder WHY Tamang people surrounding Kathmandu valley are doing such. Then when I heard third time the same stories from the trafficked girls started to deeply and critically wonder WHY Tamang family residing surroundings to Kathmandu, capital city of Nepal are doing such criminal act to their own believed daughters, sisters and wives.
Reading the news, articles, documents and hearing such news from media and also from those brothel returnee girls came to learn that in Nepal, Tamang community is the number one in supplying and selling their daughters to India [1, 2]. It is interesting to know from the history that in the late 17th century, the brothel area of Kamathipura was first established to service British troops in what was then called Bombay, India [1, 2]. Moreover, adjoining districts to Kathmandu namely, Sindhuplachowk, Kavre, Nuwakot, Dhading and Makwanpur where Tamang community are densely reside girls have been trafficking since ancient times. It is really annoying to read that "Sex sells and girls from villages like Ichowk, Mahankal and Talmarang in the Sindhupalchowk district in northern central Nepal are full of girls who are more than anxious for a better life."  Moreover, Tamang girls have been victims of trafficking for generations. This is not just because of the ignorance, illiteracy but due to political reasons and grand designed plan of former rulers, Ranas and Shahs rather. Everyone says it is because of the poverty and lack of education but I do not agree with this because there are many communities such as dalit (untouchables), Tharu, Chepang including other castes/ethnicities who are relatively marginalised and poor compared to Tamang but their daughters and girls are not  trafficked and sell for sexual affair. 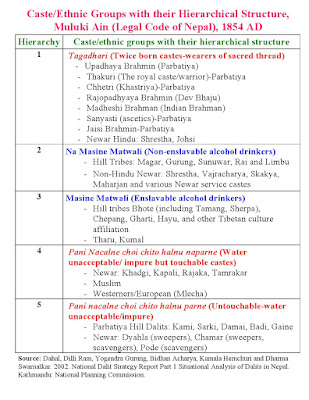 Exploring historical background of Nepal I came to realized that Tamang ethnic group being largest and surrounding to the Kathmandu valley was always threat to Nepal's rulers that's the reason they had been strategically marginalized since 18th century formulating state law categorizing them as an Enslaveable Alcohol Drinker in hierarchical classification they fall under 3rd group of caste/ ethnicity. Men from Tamang ethnic were not allow to join any security forces such as Army and Police. They were used as a porter "Pipa" of rulers and of the Kathmandu valley and their girls and daughters had been used for sex trade both within and outside Nepal to GENOCIDE them. In the Royal Palace Tamang girls were used as a sex slave, concubine and also some of them sold toe. Therefore, girls trafficking in Tamang community is a political issue that has been started from Sindhupalchok, a home district of  an influential politician of Nepal during the regime of kingship, currently chairman of the Rastriya Prajatantra Party (RPP = National Democratic Party), Pashupati Shamsher Jang Bahadur Rana. He had hold important positions in the representative system of Panchayat devised by King Mahendra, in particular he was Minister of State for ' Education (1977-78) with the addition of Transport and Tourism (1978-79), Minister for Water Resources (1983-84) with Communications (1984-86), Minister for Panchayat and local Development (1986- 88). After the end of the panchayat, he was Minister for Foreign Affairs, for Finance, Water Resources and Communications (1990-1994) and Minister for Water Resources (1995-97 and 1997-98). Pashupati SJB Rana has been continuously represented in Parliament from 1973 to 2006. Similarly, in Nuwakot Dr. Prakash Chandra Lohini from the same political background had been in the top political appointment as a Member National Legislature, Kingdom of Nepal, Kathmandu, 1971—1975, 1981, National Development Council, Kathmandu. He was a Finance minister His Majesty's Government of Nepal, since 1983 and also a Minister of housing and physical planning. Dr. Lohini electoral area is the same area of Nuwakot district where hub of girls trafficking in Nepal is considered. These include Ghyangphedi and Sikharbesi village development committees, the place just opposite to Sindhupalchowk district's village development committee "Helambu" from where girls used to bring to the palaces in Kathmandu as a sex slave and concubine since 19th Century. Although the precursors to trafficking can even be traced back to the Rana Regime, when young girls from Sindhupalchok, Kavre and Nuwakot used to be brought to the palaces in Kathmandu as concubines but thereafter these both politicians could be the main hidden Mafia in promoting the industry in the trafficking of Nepali girls, especially Tamang is a very lucrative business. It can include forced labor, domestic and factory work [2]. Young girls who are teenagers are often used in the sex-trafficking industries, though, because of the extreme profit for traffickers and the very low incidence of law enforcement arrests against sex-industry racketeers.
Historical evidence suggested India ruled by British rulers in order to fulfill sexual pleasure and satisfaction of  the British troops of East India Company girls from surrounding Kathmandu valley mainly from Tamang community started to supply in 19th century during Rana Regime.
Analyzing how rulers rule in this world or any society has interesting strategy. In fact, they rule by naming, shaming and blaming those people who they think are their enemy due to either large number of population or historically challenge rulers. In fact, rulers and ruling class, color, creed and caste male members strategy of Nepal has always to degrade, dominate, discriminate and despair rest of the population of Nepal proven from their intentional action and reaction to date that almost each and every Nepalese had gained experiential understanding and knowledge about it.