Buddha is NOT a GOD and Buddhism is NOT a RELIGION 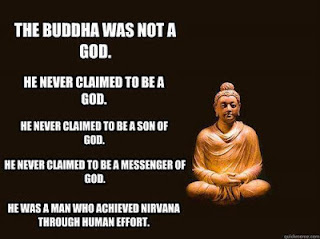 Exactly!
However, ironically Buddha BLIND followers and believers consider him as a GOD and his practical philosophy, Buddhism is considered as a RELIGION. Actually neither Buddha was/is a GOD nor Buddhism is a RELIGION.

Buddha was an intuitive and awaken person who became a philosopher who could rationalize cause and effect relationship of each and every happening and incident based on the law of nature and by generating practical philosophy for general people who wanted to be awaken/enlightened their self  thus he has been well respected by the past and present scientists. However, one monk in Sri Lanka said buddhism can be described better with the words "self psychotherapy" than religion or philosophy.﻿

It is worth listening the talk from the monk, Ajahn Brahm from The Buddhist Society of Western Australia about Buddhism, Religion? access from http://www.youtube.com/watch?v=iIeLuMX-2p8&feature=relmfu.

Though I was born in a Tamang community who in Nepal is considered by birth Buddhist but never ever thought and believe on GOD and also was not keen about Buddha teachings. Unless and until I knew the essence of Buddha teachings and true meaning of Buddhism as a practical philosophy based on the law of nature I was always sceptical but admire the practice against killing animals and else. But now I've been truly convinced with Buddha teaching because it talks about the LAW OF KARMA (Kamma) and the individual's MIND POWER.

Though I never ever believe on GOD but I believe in the law of nature and natural forces that exist in this world which has created living things and beings and now I've been realizing that I am in some how is in right direction. Thank to the law of nature and cosmic force which have guided me up to here in the right path knowing or unknowingly helping me to walk in the proper direction that I have been appreciating while reflecting my past to present paths.

One of the greatest minds on earth, Albert Einstein accepted that only Buddhism has charasteristics of a cosmic religion. He said "The religion of the future will be a cosmic religion. It should transcend personal God and avoid dogma and theology. Covering both the natural and the spiritual, it should be based on a religious sense arising from the experience of all things natural and spiritual as a meaningful unity. Buddhism answers this description. If there is any religion that could cope with modern scientific needs it would be Buddhism."

After reading above statement and keep exploring about Buddha teachings and listening talks from different psychologists and scientists including monks and also about "DO BUDDHISTS BELIEVE IN GOD ?" from the monk (access from http://www.youtube.com/watch?v=IFdz5RPj-3s&feature=youtu.be) I felt good because Buddhists believe in the law of karma (Kamma), the law of causative rather than mythology like we can hear in other religions.

Worth listening the talk  the monk from The Buddhist Society of Western Australia about the "Law of Kamma" access from http://www.youtube.com/watch?v=VTuxmFYQJjs&feature=relmfu

In our discussion in the facebook Scott Schuele, Founder Director of Nalanda LGBT Buddhist Cultural and Resource Center said "The Buddha said it was fruitless to even ponder the notion of a creator mainly because it keeps us in linear thinking- everything has to have a beginning and an end, which is not true . Enlightenment or nirvana is a state of mind, not a place. Some reach it after a lifetime,that is the primary Theraveda view. The Mahayana and the Tantric view is that it can be accomplished in a current lifetime. There are Tibetan masters I view has enlightened. He further added "The Buddha was asked what he taught, he said, " I teach one thing and one thing only suffering and the end of suffering. Buddhism is not a religion in the traditional sense because it doesn't believe in a creator outside of the self. It is not a philosophy in the traditional sense for as the Buddha at a certain points words and theory are meaningless and need to be let go of."
Posted by Laxmi Tamang at Saturday, September 08, 2012