Protect yourself from Sociopaths: Learn to recognize the traits—then stay away

According to the evidence there are 4% population in any given society are suffering from Sociopath (also called a psychopath).

Sociopathy is a complex personality disorder. Sociopaths exhibit a wide variety of maladaptive behavior which makes the condition difficult to diagnose. Sociopathy is not one trait; it is a syndrome—a cluster of related symptoms.

Psychologist, Dr. Robert Hare,  a researcher in the field of criminal psychology has spent over 35 years researching psychopathy and developed the scale/checklist to spot out such antisocial personality.

Dr. Robert Hare has identified key symptoms of psychopathy. Excerpts from his descriptions of the symptoms appear below. 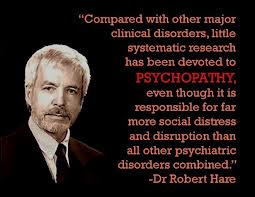 Psychopaths are often witty and articulate. They can be amusing and entertaining conversationalists, ready with a quick and clever comeback, and can tell unlikely but convincing stories that cast themselves in a good light. They can be very effective in presenting themselves well and are often very likable and charming.

1. Hare, R. 2011. Without Conscience: The Disturbing World of the Psychopaths Among Us, Guilford Press.