Our consciousness is relating to our spirituality how much we are consciousness in talking and doing things that can be assessed how much ignorant or aware we are about self and else and based on that we use wordings, make discussion and argue with people as per the knowledge that we've.

The spiritual progression is back to full and free Spirituality long journey from maximum unconsciousness to cosmic consciousness. In broader sense it has categorised in two stages:

Including both stages there are total 10 stages of human consciousness journey that we can achieve!

These stages are characterized by what consumes the Time and Energy (TE) of the person. TE includes attention and all THINK→DO→HAVE of the person: time, and interests, goals, desires, thoughts, planning, resources, money and resources, and efforts. The stages are, therefore, a progression of values and motivations in life.

In the Dark Ages or Stages, the human being lives in spiritual darkness (i.e. ignorance). He does not know what he is, where he is, where he came from, how he got here, the purpose of life, or how life works. His life revolves around the body and controlling matter with great desire, effort and struggle. He does not perceive himself as a spirit, and may believe that he has evolved from matter itself. His perceives others as competitors for the scarce and hard to get goods of the material plane. His accounts with higher reality are usually satisfied by the authoritative, dogmatic beliefs systems called religions, which often forbid questioning and seeking any truth outside of themselves. The Dark Ages are characterized by the External Quest and search for pleasure (MoPs) and the avoidance of pain, efforts which are never more than momentarily successful.

1. Survival
In this first stage, the person is totally occupied in just staying alive. Life is a struggle to satisfy the basic needs of the body. This level has a hierarchy of needs: air, water, food, clothing, shelter. As each need is satisfied for the moment, the person's attention and effort will move to the next. The person has little TE left over from the struggle to stay alive to do much else. The dominant energy is frustration, desperation, fear, and sorrow. Perhaps 50% of the world's population is in this stage in the year 2007.

2. Security
In the second stage, the person has immediate Survival (the first stage) handled, and can put some TE to assuring survival into the future. His consciousness will now focus on securing that he (and then hir loved ones) can eat and have a place to live tomorrow and the next day and the next month. Many people experience this level as anxiety and fear about job security and paying the bills. People hoard money and material things trying to assure their future security. The dominant energy is anxiety and fear.

3. Sensation, Pleasure
In the third stage, the person feels that s/he has survival and security under control for the moment. He will then turn hir TE to gratifying the physical senses, to seeking pleasure. In this level, life is about "having fun." The person seeks to wine and dine, and fete the senses with finer clothes, jewelry, perfumes, luxury items, music, parties, travel, vacations, sex, drugs, etc. anything that provides sensual stimulation. The person equates happiness with physical well-being and sensual pleasure.

4. Dominion or Egoic Power
As the spirit grows, and sensation needs are satisfied but the person is not, he must seek bigger games in hir compulsive efforts to fulfill the Imperative to happiness. In the Dominion stage, the person moves into wanting power and mass. S/He wants to control people, places, things, events, and energy; and to accumulate material things or money. This part of the External Quest is the search for fame and fortune: recognition, prestige, fame, social position, money, and economic, political, business, or military power. It can take the form of striving to move as high as possible in a hierarchy, be it a corporation, the government, the military, or a church. However, it is egoic power: power used for the benefit and glory of self; as opposed to love power, where everything is administered for the good of all.

5. Dark Night of the Soul

As the person grows through the Dominion state, there will come a time when its targets and values no longer satisfy the spirit. Life begins to be experienced as empty and meaningless. The person looks up from hir beguilement with Matter and asks the Philosopher's Questions: Where am I? What am I? Who am I? What am I doing here? Where is here? How did I get here? Where am I going? What is the purpose of my life? What is the purpose of it all? There has got to be something more!

Complete transition into the depths of the Dark Night can take years, but eventually the BEing is in the experience of the dryness and emptiness of life most of the time. It is usually an extremely painful era, filled with frustration, desperation and depression. The painful urgency for solution sends the BEing into the next stage: The Search, which is the beginning of the Enlightenment Stages.

Enlightenment is just that: the coming, the Dawn of the Light, of the Gnosis, of true knowledge of the nature of existence. It is the transformation of a person from the realities, values, and behaviors of the lower stages, of the External Quest, to those of the higher stages, the Internal Quest. It is an awakening of the spirit to itself. Spiritual values and efforts; study and personal growth; love and service to others, and Illumination, the re-Birth of the Spirit, begin to take the upper hand in the person's TE.

The Stages of Enlightenment
6.  Search
The pain of Dark Night of hir soul impels the BEing to begin a Search for Light, for relief from the suffering, for answers to the Philosopher's Questions, for real Knowledge. The person's religious beliefs are seen to be inadequate as answers to the Philosopher's Questions and to hold no real Light. The person begins to seek for Knowledge: to investigate other religions, but above all to seek outside of traditional religions: to read books, to attend courses, to investigate spiritual systems. The person must accumulate a mental mass of spiritual ideas and concepts. 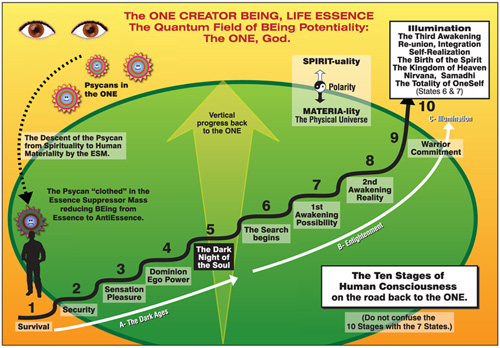 7. The First Awakening
First Light, the Dawn, the real-ization of the Possibility that life is fundamentally spiritual In hir Search, eventually the person accumulates sufficient, true spiritual information that the possibility that life really is spiritual arises for the person. (This awakening must not be confused with religious beliefs or fervor. Religion is mental and consists of others's realities about God; not one's own experience and conclusions.) The person begins to see that hir suffering in the Dark Night is a spiritual problem. The Dark Night is still very much present, and the person is still in great confusion about the nature of spirituality. The Search for ever more Light, now whetted by the success of the First Awakening, continues and leads to:

8. The Second Awakening
Sunrise, Reality. The person continues to read, study, and attend schools; and the quantity and quality of true spiritual knowledge, the Light, increases, and the Darkness of the soul decreases. Eventually, the Light as the total mass of reality and conviction of spirit, passes the 50% mark: it is now more real for the BEing that life is spiritual than is real the ignorance and confusion of the Dark Ages. This point, when the Light is 51% or more, when consciousness of spirit takes the upper hand in the person's awareness and values, is the Second Awakening. However, especially at the beginning, it is only 51% most of the time, and the person will still have periods of great confusion and attacks of the doubts and despair of the Dark Night.

9. Commitment (Warrior)
Eventually, the Light of Truth that the person has been nurturing within becomes so strong that s/he can no longer ignore its brilliance and its call. S/He now begins to obey the injunction of Christ: Seek FIRST the Kingdom of Heaven. Previous to this stage, no matter how much attention the person had on hir spirituality, it was still not first in hir priorities. S/He would still "lay up" hir "treasure" (TE) more towards worldly things that spiritual ones. Previous to Commitment, the person puts worldly considerations of family, work, pleasure, fame or fortune ahead of hir spirituality. The Commitment stage begins when s/he reverses hir priorities. Now, hir spirituality is more important to hir than hir worldly affairs. S/He intensifies disciplines like meditation.

This stage is also called Warrior (of the First Level), as the person now enters into full "battle" with hir lower self to eliminate all negative states and to discreate the Essence Suppressor Mass. Where the normal human being flees or attacks negative things, the Warrior welcomes everything, no matter how painful, that helps hir grow spiritually. As it is said in mysticism: "There is he who has conquered a thousand armies. There is he who has conquered himself. Far greater is the latter."

10. ILLUMINATION
The journey from Darkness to EnLIGHTenment finally terminates in Illumination, the totality of the LIGHT.

This state has been called many things throughout mystical history: The Third Awakening; the Return, Re-Integration to the ONE, Cosmic Consciousness, Nirvana, Samadhi, the Beyond, the Kingdom of Heaven, Self-Realization, God-Realization, the Birth of the Spirit, to name just a few. It is the recovery of your true identity: the Infinite One God Being. The state of Illumination is far beyond any capacity of the human being to understand and nothing we say about it can really convey what it is. You slips the surly bounds of Matter (of the Essence Suppressor Mass) and re-integrates hir spirit to the ONE. You are now experientially ONE with ALL THAT IS and literally God. You have total, instant power over the physical universe.

This is the state of Buddha, Christ, and Lao Tse. Only about 235 human beings have ever attained it since the beginning of Humanity. This state seems to have two levels. In the first level, individuality remains. The BEing may remain an individual (the 6th State in the Seven States of Consciousness*), and do so for all eternity; or return completely to BEing the ONE, as s/he pleases, Level #7 in the Seven States of Consciousness, by dropping all individuality. However, because of the Laws of Polarity, this last stage will eventually require another descension into limited individuality.

ILLUMINATION is the culmination of life on earth. However, it is but the beginning of true spiritual existence, as it is the re-entry point of a fully Self-Realized and free spirit back into the cosmos of all creation that consists of innumerable universes.