Historical injustice should be addressed through Reparation

Historical social injustice should be addressed through Reparation for the systematic, structural and strategic marginalisation of certain groups by the state which has done in Nepal since 18th century imposing unjust law, policies and strategies based on the Law of Manu "Manusmriti". However, it has been overlooked because only handful of Nepalese are aware and informed about it and the vast majority of people who are holding power in the state three major pillars known as executive, legislative and juridic belong to those families, colour, class and caste whose ancestors were involved in marginalisation and discrimination of large group of Nepalese.
According to the Constitution of Nepal “Marginalized” means those who have been forced to fall backward politically, economically and socially, those who have been unable to avail services because of discrimination and harassment, and because of geographical disconnection, and those communities whose standard of living has been below the legal standard as specified in the Human Development indicators. It also signifies the ultra-marginalized and communities on verge of extinction [1]. In Nepal according to the Nepal Federation of Indigenous Nationalities following indigenous have been classified as a marginalised group. These include
1. Sunuwar 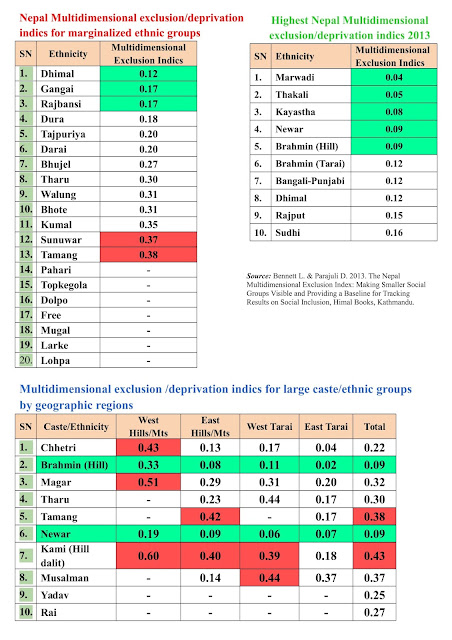 2. Tharu
3. Tamang
4. Bhujel
5. Kumal
6. Rajbansi
7. Gangai
8. Dhimal
9. Bhote
10. Darai
11. Tajpuriya
12. Pahari
13. Topkegola
14. Dolpo
15. Free
16. Mugal
17. Larke
18. Lohpa
19. Dura
20. Walung
According to the Nepal Multidimensional Exclusion Index 2013 aforementioned marginalised groups are massively deprived from the state welfare system [2]. However, they still has to compete with caste/ethnic groups that have privileged by the state system. In order to uplift marginalised communities government of Nepal should make policies, strategies and plans based on the available evidence such as Nepal Multidimensional Exclusion Index 2013.
Therefore, when government of Nepal makes policy to uplift these marginalised group members they have to clearly specify how they will uplift from their present status of backwardness because of unjust politically, economically and socially discriminatory policies, law and strategies imposed on them and their ancestors. They should be provided justice by reparation addressing historical injustice that was imposed on them.
Reference
1. Government of Nepal 2015. Constitution of Nepal 2015. Kathmandu, Nepal.
2. Bennett L. & Parajuli D. 2013. The Nepal Multidimensional Exclusion Index: Making Smaller Social Groups Visible and Providing a Baseline for Tracking Results on Social Inclusion, Himal Books, Kathmandu.
Posted by Laxmi Tamang at Sunday, September 03, 2017