Kama Sutra: The Greatest sexual text ever written in the human history 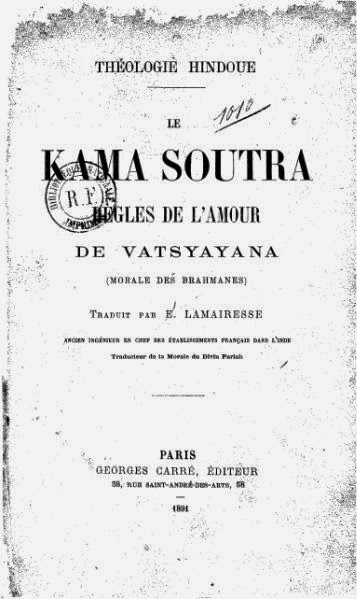 The greatest book ever written in ancient India about the Art of Sex and Love is  known as Kama Sutra, written by the Indian sage,  Vatsyayana, who lived in northern India around 3rd or 6th century (just speculated but not confirmed to date) of which Indian are very much proud of their ancestors who gifted such a great book to this world.

In fact, Kama Sutra is an ancient Indian text widely considered to be the standard work on human sexual behavior in Sanskrit literature. A portion of the work consists of practical advice on sexual intercourse. who lived in northern India.

BUT  I wonder WHY some Nepalese are so much proud of this book saying that our ancestors wrote it down. If they think such then aren't they Indian as well  being proud of Indian literature.

Anyway written in a rather complex form of Sanskrit, the Kama Sutra  is the only surviving
g textual account of that period of ancient Indian history. In scholarly circles it has been widely consulted by scholars trying to understand the society and social mores of that period. The title of the text, Kama Sutra , literally means "a treatise on pleasure." Far more complex than a mere listing of contortionist sexual positions, the Kama Sutra  provides a comprehensive manual of living for the good life. Although the central character of the Kama Sutra  is the citizenly man-about-town, the text was written to be read by and provide detailed advice for both men and women.

I strongly suggest to read Kama Sutra to each and every Nepalese and Indian youth and person who love to have sensual pleasure  and love from their beloved sexual partner or relationships so that we can wipe out Taboo that exist in our society  related to SEX and LOVE in our part of the world.

Reference
1. A Brief History of the Kama Sutra http://www.alternet.org/story/86582/a_brief_history_of_the_kama_sutra